One of the things I like about Dustin Johnson is his low-key, no drama approach. His tweet on returning to defend his Masters title is perfectly chill (see above). You wouldn’t even know he currently holds the title.

There are a lot out there who think Johnson’s relaxed approach makes him uninteresting, that he is uninterested or that he is perhaps more than a little thick. I don’t think any of those are true.

Pigs in a blanket, salad, mashed potatoes, a piece of basic beef and cobbler. That’s the kind of menu you get at Grandma’s house.

Pigs In A Blanket, for those who are culturally deprived are chunks of hotdogs wrapped in a pastry. 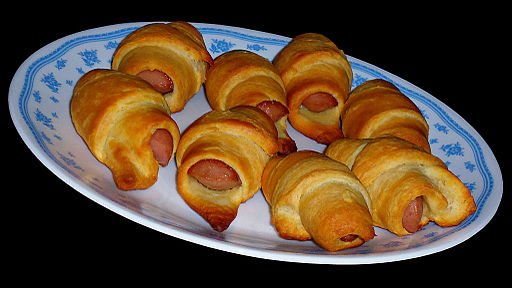 I’ll bet this is the first time Pigs In A Blanket has shown up at a Champions dinner. But I think it perfectly suits the man being honored. Just another day at the course. Just another meal.

I would not be at all surprised to see Johnson as a back-to-back winner.

The Five Inch Course will help you play smarter golf to lower your scores TODAY. Bobby Jones said "Golf Is played on a five inch course -- the space between your ears."
Privacy & Cookies: This site uses cookies. By continuing to use this website, you agree to their use.
To find out more, including how to control cookies, see here: Cookie Policy

This is the golf blog of golf’s 99%: The working stiff who plays at munis with ten-year-old clubs and whose family and work take precedence, but whose love of the game never diminishes.