Weird Golf Story of The Week 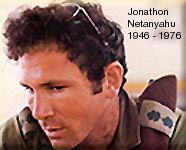 Those of us of a certain age remember in 1976 when Entebbe airport was the scene of an international hostage situation. Two Palestinian and two German terrorists (an unholy anti-Semitic alliance, that)  had hijacked an Air France flight originating in Tel Aviv and forced the airplane to Entebbe Airport in Uganda. There, Ugandan leader and all-around-madman Idi Amin facilitated the hijacking, providing them with a safe haven. Eight days after the crisis began, a group of Israeli commandos, led by Yoni Netanyahu (at left), freed the hostages. Yoni Netanyahu (brother of Ben Netanyahu, who later became Prime Minister) was the only Israeli military casualty. It was truly a heroic effort.

Now the airport is holding a shipment of golf clubs hostage, accusing the West Nile Golf Course of Arua of not paying its bills.