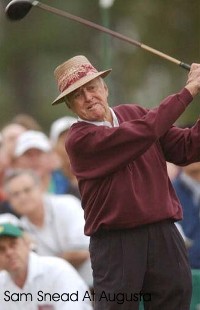 The first balls off the tee at the Masters are hit by “honorary starters,” a tradition which began in 1963. The first honorary staters were Jock Hutchison and Fred McLeod—two men with ties to Augusta National.

Hutchison won two Major Championships in his golfing career—the 1920 PGA and the 1921 Open Championship. He also was the winner of the inaugural Senior PGA Championship (1937), which was held at Augusta; he won that event again in 1947. He started until 1973.

McLeod was a founding member of the Senior PGA, who played in the first four Masters. He acted as a starter until 1976.

Sam Snead served from 1984 to 2002. Slammin Sammy won a record 82 PGA Tour events and about 70 others worldwide. He won seven majors: three Masters, three PGA Championships and one British Open

With the passing of Arnold Palmer, Jack Nicklaus and Gary Player—the surviving members of the Big Three—now serve as honorary starters.

But I wonder. Who will have the stature—and willingness—to serve as honorary starters twenty years hence?