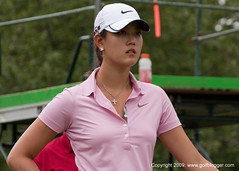 A decade after her first appearance on the national stage, Michelle Wie finally has won her first LPGA event—the Lorena Ochoa Invitational by two strokes over Paula Creamer.

When I think about it, that’s a remarkable statement. But the Michelle Wie saga has been a remarkable one, thanks to the media circus that, for better or for worse, has surrounded her life. Since her first USGA event at age ten, Wie has been offered to the public as the female version of Tiger Woods. Incredibly long off the tee, she played in her first LPGA event at age 12, and at age 16, played in the PGA Tour’s Sony Open. There, she shot a second round 68, the lowest ever by a woman in a Tour event.

Just before her sixteenth birthday, with multimillion dollar deals from Sony and Nike in hand, Wie went pro. She was expected by many to dominate the LPGA.

But until this year, Wie has never fulfilled her promise. She has struggled in LGPA events, and many began to wonder if for all the hype, she was a bust. Her meddling parents and career missteps didn’t help the situation. Soon, instead of expecting great things, observers began to openly wonder if she hadn’t been ruined as an athlete.

But golf historians may look back at 2009 as the turning point. In addition to the win at the Lorena Ochoa Invitational, Wie has finished second twice on the tour this season, and has a pair of thirds to go with that. That’s not exactly the record of a superstar, but it is a solid season.

And that’s exactly what Wie may need. She’s learning to win, regaining confidence and making her own place on Tour.

She’s also exactly what the LPGA needs in this moment of crisis. In the upcoming year, a resurgent Michelle Wie would spark media interest and might actually save a few tournaments. Even as she was struggling, Wie was the closest thing to a media darling the Tour had—as I observed at the Jamie Farr Classic in Sylvania, Ohio. There, in spite of all the dashed hopes, she still was followed by a pile of spectators, reporters and photographers. Her gallery was twice as large as that of anyone else present.

But that’s all in the future, and is more of the hype that has until now defined and perhaps ruined her career. The only thing I’m sure of is that she’s glad to get the monkey off her back.