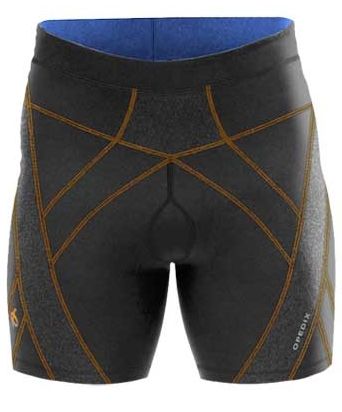 Opedix Core-Tec Shorts
Grade: A
Teacher’s Comments: Nice support for my ailing lower back and hips.

It is a sign of the march of years that I find myself increasingly discomfited by lower back and hip pain. It’s a hereditary condition, I think, as most in my family have at one point or another undergone back surgery. Still, with a witches’ brew of anti-inflammatory medicines, light weights, regular biking and walking, chiropractic treatment and even acupuncture, I’ve managed to put off the surgeon’s knife.

I still generally play with a bit of pain, though, so I was intrigued when a pair of Opedix Core-Tec shorts arrived for my review.

The Odipex Core-Tec are a compression-style short designed to support your body’s core. It’s constructed of 27 panels of stretch and non-stretch fabrics which supposedly “mimic the gluteus-medius muscle to align the pelvic region, promote core stability and improve dynamic balance.”

The shorts are sturdy—even heavy—and as you might expect from compression shorts are quite tight. Tight elastic bands fit around the bottom of the legs. My first impression upon donning them was that they would turn out to be somewhat too tight and uncomfortable. I was especially aware of the elastic leg bands. It all felt pretty constructing.

As I wore them around GolfBlogger World Headquarters on a test run, however, found that I very quickly got used to the feel. The next test was a round on a course. I took no chances, though, stashing a pair of regular boxers in case I got uncomfortable and need to change at the turn. I also thought they might turn out to be just too darn hot.

I shouldn’t have worried. I hiked through eighteen on a warm and humid day in complete comfort. I didn’t notice the compression or weight at all. That’s likely because the fabric is designed to be both moisture wicking and breathable (it also has anti-odor properties).

As for the kinetic enhancement function of the Opedix Core-Tec, I think it works. I’ve now gone through several rounds with the shorts on and it really does seem as though I’m less sore and fatigued for wearing them.

Interestingly, the Opedix folk actually have scientific studies to back their claims. One study showed that core stability was improved by 21% with participants wearing the shorts.

In addition to the shorts, Opedix makes tights also designed to support the knees.

If you suffer from lower body pain or fatigue from rounds of golf, I think you could find the Opedix Core-Tec shorts of benefit.

The Opedix Core-Tec shorts are on the expensive side, but with a 30-day money back guarantee, I think they’re worth a try. Given the lower body support, it is also possible that a player could see some game improvement.

My experience with the Opedix Core-Tec shorts has led me to start researching various compression apparel for the upper body. That’s another area that I feel could use some support. Maybe Opedix will come out with a t shirt that sports the same supporting tec

The Opedix Core-Tec shorts are going to be a part of my golf expeditions for some time to come.